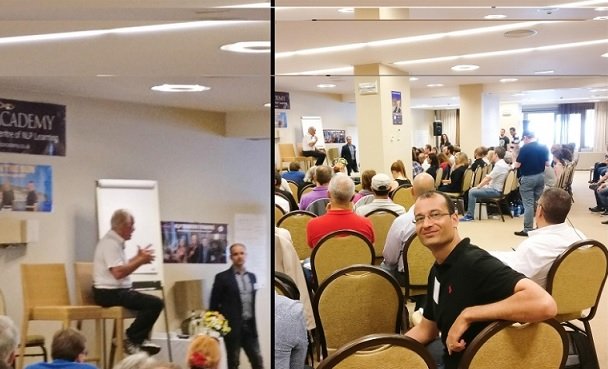 What I learned from John Grinder

As an NLP Trainer you may want to attend an NLP Training session with the Co-founders of NLP, which may allow you to connect with their version of the history. I’m writing this article to tell you what I learned from John Grinder, and most importantly, “Why John Grinder?”

Honestly, I liked the idea of attending the program ‘NLP in the Sun’ in the pristine location of Portugal (Summer of 2017), and with a well respected co-founder of NLP as my NLP Trainer ~ it was a dream come true!

I consider myself a really big fan of few big names in the NLP World ~ Richard Bandler (Co-founder), Robert Dilts (Co-developer), Michael Hall (Cofounder of NeuroSemantics & Top Leader in NLP) and when it comes to NLP I have had my fair bit of access to Richard Bandler trainers. Having attended courses conducted by Richard Bandler certified trainers, I thought an NLP New Code training program would be a welcome change, and that too from the Co-founder directly ~ icing on the cake!

I was not sure what to expect from John Grinder, so I went with an open mind ~ courtesy my own programming of my mind to be open when attending a new program.

Among both Co-founders, Richard Bandler garners more popularity according to Google searches and based on the number of people who attend his programs. He was the first to have started it all in the 1970s, and then John Grinder followed ~ with both of them doing wonderful work together during the initial years of NLP.

Richard Bandler is younger than John Grinder by almost 10 years ~ he is magnetic, has amazing stage presence, is humorous and witty, and his demos are powerful ~ some credit goes to the camera person as well! Although when it comes to his own lifestyle, many people in the NLP business often point out that he lacks vitality, health, and congruency; as a lot more is expected from him, since he is the co-founder of NLP, and teaches NLP. Nevertheless, in my opinion, he can afford to carry if off (He is the co-founder of NLP) and choose his own personal lifestyle ~ it is his life at the end of the day!

John Grinder, on the other hand, although being the older one among two is very healthy, disciplined, and congruent. He promotes ‘states’ and physiology as the key element towards excellence, and he walks his talk.  Considering John’s age (nearly 80), he is really a force to reckon with on stage, and believes in giving maximum value to participants, rather than creating a ‘show’ (which is what many people say about Richard Bandler’s training sessions). His amazing energy is reflected in his own physiology ~ he stands all day and does not show any sign of fatigue even at the end of his long training sessions.

John Grinder created the “New Code NLP” because his view was that even though NLP Practitioners who managed to learn classic code and managed to work with clients were getting fabulous results with their clients, they were not able to find a breakthrough in their own life, and were not congruent themselves in many situations. Rather than working on individual behaviours, he transformed his work based on High Performance States, providing people with several choices during situations. Tony Robbins, who was the student of John Grinder and Richard Bandler works using High Performance States, is considered the King of the Self Help world. He managed to leverage what he learned from John Grinder and Richard Bandler to create a Business Empire, which is the best ‘Testimonial’ for John Grinder’s contribution to self help industry.

I have been practising NLP for many years, and have seen amazing results as far as my clients are concerned. My experience of attending a program with John Grinder, opened up a new world of NLP for me; providing me with access to some New tools, New Ways of exploring possibilities for my clients, and most importantly help on a Personal Level (which is the key to New Code NLP – self work for Practitioner). I worked on many personal concerns during the program, and found myself more congruent in different situations where I lacked choices when I was in those situations. So overall, it was a great learning experience, and left me looking forward to taking my NLP and Coaching journey forward using these new learnings.

If I had to summarize in one word what I learned from John Grinder ~ it would be the usage of ‘High Performance States’. I was also provided a personal one-to-one with John Grinder (my super fan boy moment!) and that conversation with respect to ‘NLP and Leadership Coaching’ will stay with me for rest of my life!

The only thing which I didn’t like during the program were the team leaders (mentors) present during the program.  Some of them didn’t have classic NLP (The original modelling work done by Richard and John) knowledge totally grounded in them, and also during group discussions with participants they had this habit of rejecting classic NLP, and under play that.

Classic NLP is still the core work which was done by Richard Bandler, Frank Pucelik, John Grinder, and many other co-developers – Robert Dilts, David Gordon, Judith DeLozier, Steve Andreas, Connie Andreas, Leslic Cameron, Christina Hall, and many others, which is still the base of NLP, and the continued work done by Leaders of NLP namely Robert Dilts, and Michael Hall.

As a one time experience it is a program that can be attended not because of New Code (there are some elements which some of the other leaders of NLP have questioned ~ which can be another discussion) , but the very fact that John Grinder was equally responsible to create the core concepts of NLP with Richard and others, and is congruent in his life.


Get an invitation to Free Business of Coaching Live Webinar