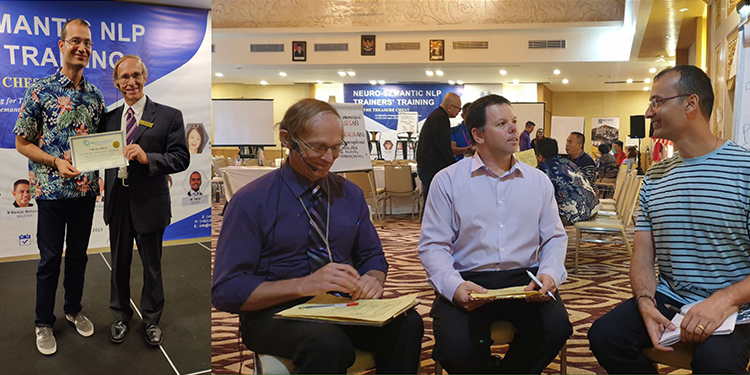 In a field dominated by greats, here is the story of a giant and a legend Dr. Michael Hall.

This post is an ode to a great teacher, mentor, inspirational soul, and to one of the most authentic NLPer, there is on the planet Earth ~ Dr. L Michael Hall.

NLP is known as the field of thought and action leaders. Being result-oriented and impactful, NLP has transformed the lives of thousands of practitioners of this technology of change around the world. However, not many are aware that NLP went through an age of darkness in the 80s and 90s due to ownership issues. The need of the hour was for NLPers to exhibit a steely grit and a selfless desire to contribute back to the field –~ in effect, continue to work on the growth of the Human Potential Movement. Unable to rise up to the occasion, many NLPers abandoned the field. But a handful of them stayed back to provide leadership, direction, and create cutting-edge NLP content.

Prominent amongst the latter category is Michael Hall. Even though he was working in the shadows of other names when the crisis began, he did not crave fame and recognition. Instead, he worked with discipline, authenticity, simplicity, dedication, and compassion. And today, his stature is greater than those of his peers and mentors.

I was recently asked ~ what does it take to be Michael Hall? What makes him so great? If we were to reverse engineer the human being known as Michael Hall, what attributes of greatness would we find?

These are difficult questions to answer but let me give it a try.

Michael Hall is great because he:

Neuro-Semantics arrived as a fresh model in the 90s for NLP practitioners to use, create, and embody meaning. By urging his students to perform their highest and best meanings, Dr. Michael Hall introduced an expression of NLP that was as timely as it was effective.

Simultaneously, he continued the modeling of great exemplars to produce workable content. While many of his peers/mentors created vague models/theories and lost their way, Dr. Hall was busy creating exceptional models/patterns.

2. Is a prolific and impactful writer

Books are important for thinkers because not everybody everywhere can experience the greatness of a thinker first-hand, by being in the same room as him. Dr. Hall’s books came to the rescue of many seeking urgent answers.

With 50+ books on NLP, Neuro-Semantics, and Meta Coaching under his belt, he is undoubtedly the most prolific writer in the field. What’s more, his quality matches his quantity. Each book is written purposefully and is backed by ample and visible research. Yet, none of his books feel chunky or academic. Instead, they are presented with impact and offer insights on the application of the content.

In the last 10 years, his books have become even more meaningful ~ they cover a gamut of areas like Leadership, Presentation, Selling, Health, and the very nature of Thinking. And they are written keeping in mind the challenges of the modern human in personal and professional domains.

3. Is a compassionate trainer

Some NLP trainers are infamously snooty. They wear a mask of excellence but end up ill-treating their workshop participants. But in the company of Michael Hall and the entire Neuro-Semantics global team, you will experience camaraderie, collaboration, love, and bonding.

That’s why, during his workshops, participants feel inspired to give their best and be their best. Michael interacts with each participant, gives feedback, and mentors them on a 1:1 basis. As a result, participants feel challenged in a positive manner and willingly move out of their comfort zone, while ensuring they go in a flow state and embody the skills learned during the program.

4. Is congruent and energetic

We often face the paradox of an (an overweight) NLP trainer talking to us about living with purpose, fitness, and congruence. In contrast, Dr. Michael Hall ensures congruence in everything he does. He has the fitness and vitality of a 30-year-old, trains for 12 hours a day, conducts team meetings after that, responds to all emails personally, reads and writes every day, guides people… phew! And yet, at the end of the day, there is no sign of fatigue on his face and in his mannerisms. He is as patient and respectful at midnight as he is at dawn.

Dr. Michael Hall embodies the quote from the marketing world, ‘Scale the unscalable and you will succeed.’ He scales the personal interaction dimension he has with each and every person during the program and post the program as well.

People in the NLP world are always wondering what the future of NLP holds. A few years ago when the world was looking for leadership, Michael Hall stepped up again and toiled hard to bring back all NLPers together (elders of the NLP field from different parts of the world) at a common ground with the sole purpose of discussing the future ~ challenges, solutions, and the way forward. These leadership meetings continue to happen due to his personal commitment to the cause and have helped in standardizing some of the aspects which will help in creating a pathway for the next generation of NLPers.

Endnote: Michael Hall’s programs are not for everybody. For instance, they are not for those who seek mere certificates and a fake aura of success. But if you seek sincere growth, he is right there, waiting to guide you.

I have attended his Neuro-Semantics & NLP Train the Trainer program. Despite it being a “by invitation only” program (where each person is required to have a recommendation from an existing Neuro-Semantics Trainer for his/her participation ~ one of the ways to ensure quality participants), we were 50+ participants from 19 different countries. Yet, each one of us experienced positivity and quantum learning. Many friendships were forged, collaborations discussed, and great moments shared. Amongst all the NLP programs that I have attended, this was by far the best!


Get an invitation to Free Business of Coaching Live Webinar